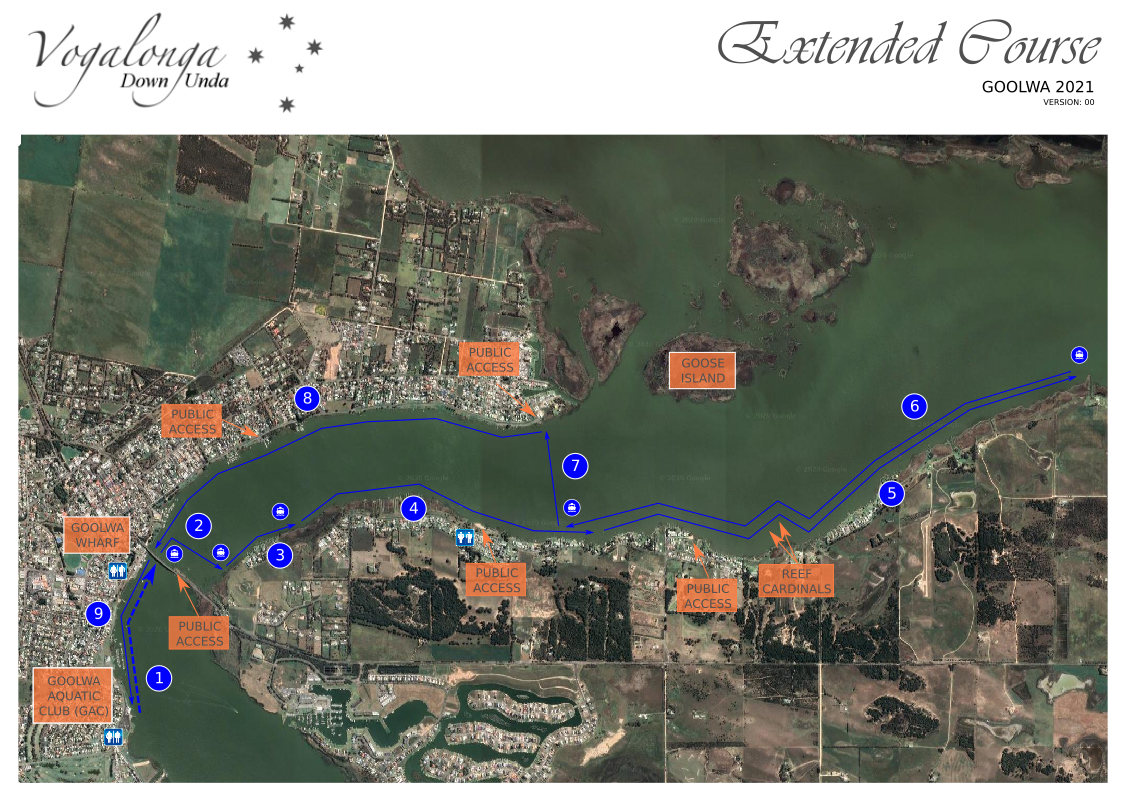 As you will be crossing the main boating channel at some point, this course requires you to know your port & starboard channel markers. For your own safety you should know the ‘Rules of the Road’ on the water, in particular keeping to the starboard (right hand) side of waterways and ensuring you leave enough space for on-coming vessels to pass on your port (left hand) side.

This ceremonial start to the event is intended to provide any on-shore spectators with a bit of a spectacle by keeping the participant fleet together as much as possible for the start of the event. Once the Vogalonga fleet has arrived in full at the Wharf, the Master of Ceremonies will facilitate an Alza Remi – a ceremonial ‘raising of the oars’ salute to Venice and Goolwa.

Under the direction of the Master of Ceremonies, starting from the GAC with everyone keeping together, cruise behind the lead boats along the Goolwa shoreline to the Hindmarsh Island bridge keeping as close as possible to PORT (left hand shoreline).

A Closed Waters permit has been obtained to facilitate this ceremonial aspect of the event.

All participant craft are to remain behind the designated lead vessels for this SLOW leg from the GAC to the Wharf precinct and follow the instructions of the Master of Ceremonies travelling in a pace boat at the head of the fleet.

There are plenty of fantastic spectator viewing locations, especially the Goolwa Wharf and the south walkway of the Hindmarsh Island (Kumerangk) bridge.

Pass under the bridge between the shoreline and the first pylon and then turn to starboard around the first Course Boat and head across the channel to the second Course Boat.

Important: As you round the first course boat you are now crossing the main navigational channel. Please be aware of any powered vessels using this channel.

Turn to port around the second Course Boat and head upstream along the shoreline towards the third Course Boat.

Continue straight past the third Course Boat. This vessel marks the turn for participants completing the Short Course.

As you continue along the northern shoreline of the Island you will pass a river access area with amenities and a shallow water boat ramp.

Continue past this towards the next Course Boat.

As you pass the fourth Course Boat continue along the shoreline of Hindmarsh Island.

Note that vessels completing the Main course will turn to port towards Currency Creek around this Course Boat.

As you pass along the shoreline you will pass another public boat ramp.  When you pass this point please take the time to identify the cardinals identifying a rocky reef.  Pass to the left of this rocky reef.

Please avoid this clearly marked region for your personal safety and to prevent any damage to your vessel.

Continue along the shoreline towards the last Course Boat.

At the Course Boat feel free to take a well earned rest. You are halfway through the the Extended course. From here you can see the entrance to the Finniss Channel and even some of the properties near Clayton Bay.

Then simply head back along the same route towards the previous Course boat, again taking care around the reef.

Turn to starboard around the Course Boat and head directly across the main channel towards the pubic access boat ramp at Laffin Point.

Important: From approximately the mid-point of this leg you are now crossing the main navigational channel.

Please note the channel markers and be aware of any powered vessels using this channel.

Keeping close to the Goolwa North shoreline head back towards the bridge.

Keep an eye out for the 4 shipwrecks along the way.

Head under the bridge between the shoreline and the first pylon and return to the finish at the GAC keeping close to the shoreline.

Remember to check back in to confirm your safe return and collect your lunch voucher.