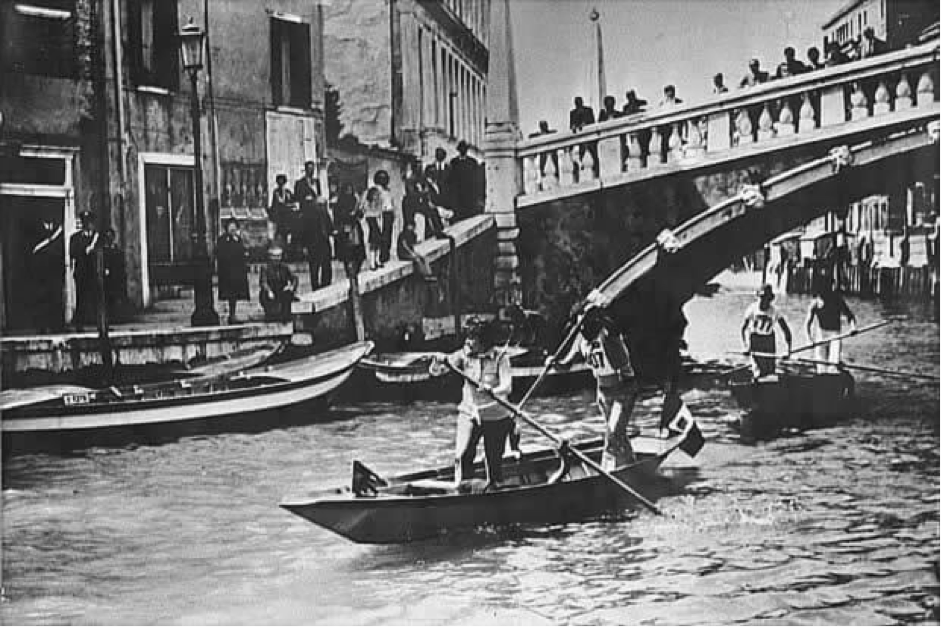 The Vogalonga of Venice

It all started one day in 1974 when three friends took part in an informal, unofficial regatta in ‘mascarete’ boats (a traditional type of Venetian boat). At the time, enthusiasts of Venetian-style rowing (voga alla veneta) were few and far between in a world where more and more were inclined to favour the use of motor craft in the Venetian lagoon. A group of traditional Venetian rowers came up with the idea of a non-competitive rowing event as a form of protest against the deterioration of the city and the adverse effects of wave motion caused by motor traffic in the lagoon. They wanted to revive the tradition of Venetian-style rowing and decided to take up arms – with their oars. All those in favour of reinstating Venetian boating traditions were invited to join the cause. These included rowing enthusiasts and others who had previously ‘laid down their oars’. From this simple spontaneous act of indignation was born Venice’s Vogalonga adventure. The event was officially proclaimed and strongly promoted by local families in Venice tired of ‘chatting and hearing chitchat’ about the lot of the city and her beautiful lagoon.

A 30km course along the canals through the most pleasant and charming places in the lagoon was charted out. The press and city institutions offered vital support. Boats were scheduled to meet up in St. Mark’s Basin (Bacino S.Marco) opposite the Ducal Palace on the day of ‘La Sensa’ (Ascension Day). It was May 8th, 1975. Nobody expected the huge turnout that ensued. It was quite a spectacle. 500 boats carrying approximately 1500 rowers silently gliding into the calm waters of the Bacino. The shot of a cannon signalled the start of the regatta and then the steady swish of numerous oars all at once. Of course there were gondolas along with a whole variety of other traditional Venetian boats: sandoli, mascarete, caorline, tope, peata, vipere and s’ciopon. These were rowed alongside other craft including some of the most prestigious boats belonging to Venetian sports clubs and boats steered by rowing champions who had brought their whole family along for the occasion. Venice had reawakened an almost lost tradition and once again found its voice in a new life form. It wasn’t only Venetians who were present. Right from the very beginning, crews from the surrounding coastal areas and the mainland took part. They came from nearby towns like Carole and Chioggia, from Padua, Treviso and Riva del Garda; even from as far away as Lombardy and Piemonte.

In a very short time, this wave of enthusiasm gave rise to more than fifty Venetian rowing clubs in Venice and on the mainland. All this contributed to a renewed sense of pride in Venice and its boating traditions which prior to this event had almost disappeared. The local newspaper Il Gazzettino described it as “a rare victory of the oar over the engine’’, a rediscovery of the evocative lagoon, a gathering not of protesters but of individuals showing solidarity with Venice: trying to reach out and defend the city against one of its most thorny problems – the adverse effects of wave motion caused by motor boat traffic. The Vogalonga gradually became more and more popular with ever greater numbers of participants until in 2007 it reached 1550 boats carrying 5800 rowers and paddlers.

Our event in Australia is seeking to ride this wave of enthusiasm and extend it to the Southern Hemisphere.

Coming to a river near you … If you would like to experience Venetian-style rowing for yourself, contact Michael Piovesan on 0145 448 657 or email or visit Venetian Rowing SA on Facebook.